It needs an Open API-based solution that allows easy integration and interoperation between multiple IoT systems and applications. 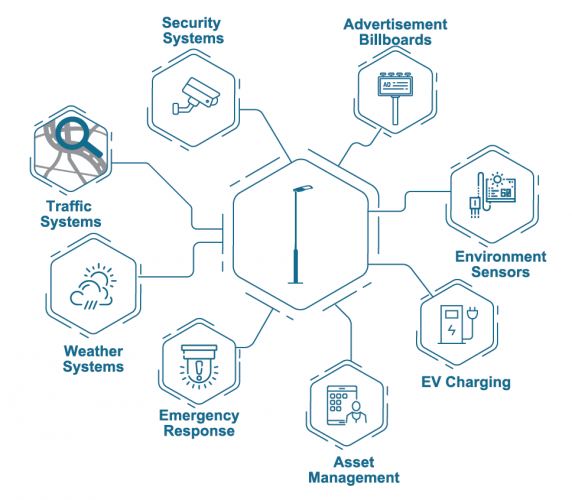 Smart street lighting can be complemented with the addition of security cameras, environmental sensors, traffic monitors, as well as an embedded electric vehicle (EV) charger installed on a lamppost. Each embedded sensor or gadget adds another benefit for cities installing smart street lighting.

“Public lighting represents one of the finest powered grids spread across towns and cities throughout the globe. It is a nerve system of a city that connects over 260 million streetlights worldwide with access to 24×7 power. Street pole is therefore an ideal spot for mounting smart city systems,” said Chintan Shah, the founder and CEO at Tvilight, a smart lighting solution provider based in the Netherlands.

A security camera can be embedded into a smart streetlight, to monitor public areas as well as providing footage of incidents. Environmental sensors can collect data such as humidity, temperature and air quality for citizens. Traffic sensors can provide real-time information on road conditions.

Future streetlights could even possibly project a colored light on the path of an emergency vehicle, so that traffic ahead could start moving aside even before hearing the siren. “Through Open API approach, multiple devices, systems and assets can be inter-connected to help cities become future-ready and leverage such interoperability,” said Shah.

Security cameras and various sensors are able to utilize the infrastructure, such as power and networks, from smart street lightings.

For network options, “cell towers today are based on 3GPP network and are being rapidly updated to offer NB-IoT communication through a simple software update,” said Shah. “Such M2M-based low-cost communication offers deep coverage to connect smart streetlights and other smart city devices such as parking nodes, traffic counters and air pollution sensors.”

Low-cost telecom networks like NB-IoT could also eliminates the need for cities to own and manage other networks like LoRA, Sigfox, UNB or Wi-SUN.

The content is from A&S Magazine written by Elvina Yang. To read the full article, click here.