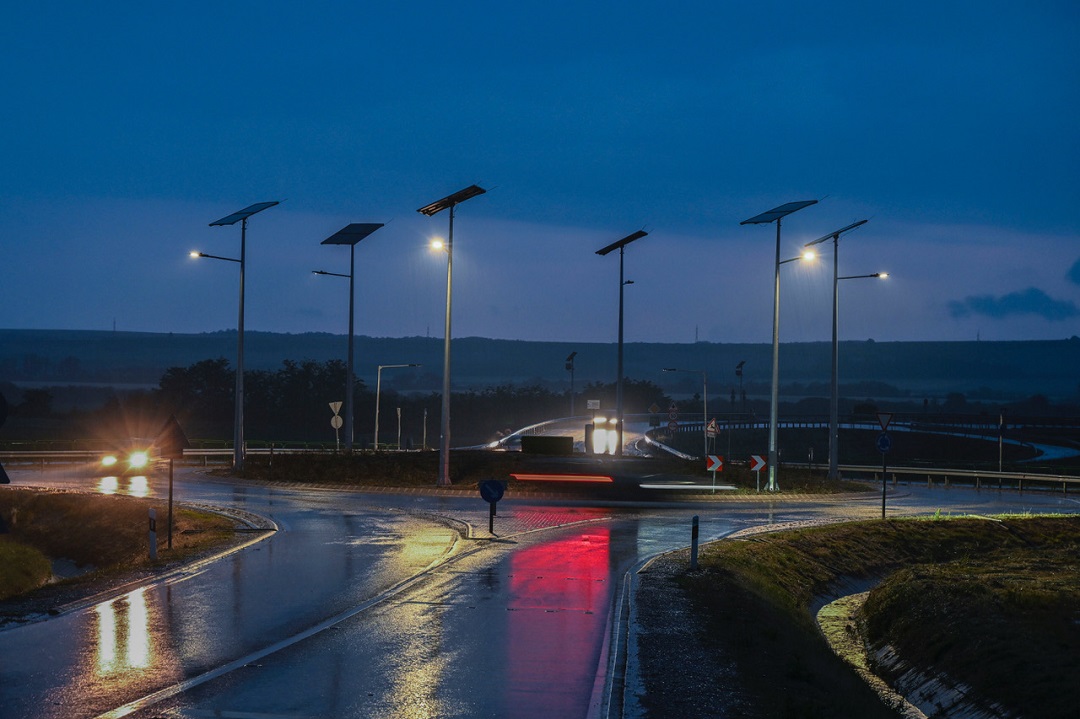 By adminNovember 1, 2022No Comments

The roundabout at the south end of Andornaktálya was constructed in the summer of 2018 as part of the construction of express road M25, which connects motorway M3 to Eger in North-East Hungary. Experiences gained since it was commissioned shows that this is an intersection which needs lighting for the purpose of traffic safety so that using the roundabout will be safer after dark for cars and bicycles alike.

A solar panel lighting system was installed at the roundabout which has a storage capacity sufficient to cover the energy needs of the functional lighting all year round. Power for the lighting is provided using solar panels and connecting rechargeable batteries.

This island type functional lighting is not only unique in Hungary, but is also the first lighting of this type in Europe. What makes it unique is that the storage capacity installed is capable of providing for night lighting all year round, even on the most overcast of days.

The core feature of this solution is that light is provided in the intersection using candelabra style lights installed on the central component, and also provided separately for the bicycle crossing. This means that those entering the intersection will not encounter any separate functional lighting columns.

This custom developed functional lighting works independently of the grid. The LED lamps provide a light level of 10 lux by default in the roundabout and 15 lux at the bicycle crossing.

When installing the roundabout, a fixed power connection has also been installed as backup in case the solar system does not generate sufficient power. This might be useful during winter, when night comes sooner, a lot of light needs to be provided during the dark, and there are fewer hours of sunshine. In this case, when the batteries drain to 60%, the system automatically fails over to the fixed power connection, and uses it to operate until the solar system again generates sufficient energy for safe operation.

This functional lighting was installed last November. Once the pilot was over, the system was fine tuned further from the beginning of the year, and is now working perfectly. Ever since the final adjustment, it was never necessary to connect to the grid.

The technology is made all the more unique by industrial motion detector sensors on the lampposts at all four connecting road sections and at the bicycle route entry point which adjust light levels. This means that a significant proportion of energy can be saved, as the standard 10 lux lighting is automatically tuned down to 3 lux when the roundabout is not being used.

The complete functional lighting system of the roundabout has been integrated with the HDMR Smart City system deployed at Magyar Közút Nonprofit Zrt., which means that the connection between the centre and the luminaries is bidirectional.

The main function of the HDMR Smart City system is to gradually decrease the light levels of the luminaries when it detects that the roundabout has been free of traffic for 2 minutes. However, when a car arrives, this is detected by a motion sensor, and by the time the car makes it to the roundabout, the luminaries receive a wireless signal which triggers an increase in light levels so that when the driver arrives to the roundabout the light is up to the standard level.

Similarly to the road for cars, a motion sensor has also been installed at the bicycle crossing, so that the light levels of the system are also increased when someone arrives by bike.

Up to 90% Energy Savings

Compared to traditional sodium lights, the LED luminaries represent an energy saving of 50%. In addition, thanks to the HDMR motion sensor technology, the system is capable of saving up to an additional 40% on average.

Following an appointment issued by NIF Zrt., this grid-separated functional lighting of the roundabout in the vicinity of Andornaktálya was constructed by Zöld Garden Kft. using developments performed by HOFEKA Kft.